At 6,593 feet, Mt LeConte is the third highest peak in The Great Smoky Mountains National Park, behind only Clingmans Dome and Mount Guyot. It is however, from top to bottom, the tallest mountain in the Eastern United States, rising 5,301 feet.

LeConte Lodge: The Inn Over A Mile In The Sky

In addition to being the tallest mountain in the Eastern US, Mt LeConte also boasts having the highest inn providing overnight lodging for visitors in the Eastern United States. Established in 1925, LeConte Lodge is a small resort, which started as a large tent, then a single cabin, and now today it has a series of small cabins which can accommodate approximately 50 guests and is open from May to November.

The weather at the lodge is similar to that of Southern Canada, with cool summers, no temperature over 80 degrees has ever been recorded there, and very cold snowy winters. The lodge is owned and operated by Stokely Hospitality Enterprises. LeConte Lodge is a concession of the National Park system. For reservations call the Lodge at (865) 429-5704. All guests wishing to stay at the LeConte Lodge must hike, as there is no transportation or road ways which ascend the mountain. 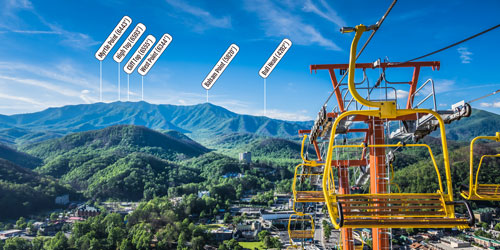 Where is Mt LeConte?

The LeConte massif stands tall just south of Gatlinburg and is clearly visible from the Pigeon Forge parkway. Its 5 peaks make it easy to identify if you know what to look for. It has 4 subpeaks above 6000 feet: West Point, High Top, Cliff Tops, and Myrtle Point. Balsam Point is just under 6000 feet and serves as a dramatic western bookend to the mountain. 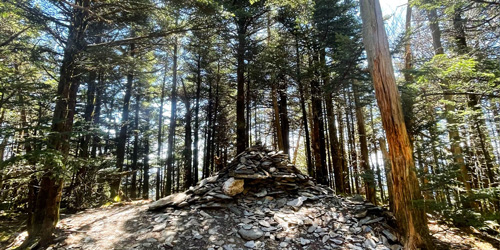 While High Top is the tallest of LeConte's peaks at 6,593 feet, the best views from the summit of the mountain are from the easternmost Myrtle Point and the more central Cliff Tops very close to LeConte Lodge. High Top is between the two amazing view points right off the side of Boulevard Trail and is marked by a rock cairn, and Bullhead Trail curves around West Point just before the intersection with Rainbow Falls. 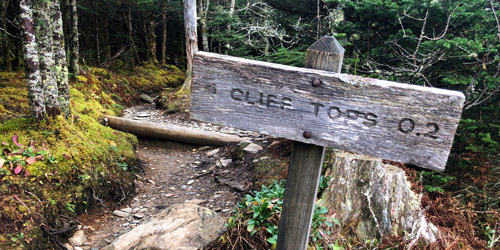 To reach the Cliff Tops from the lodge, head up the awkward staircase directly in front of the lodge's dining room. Take a right and you will see the trailhead immediately to your left. While it's only a 0.2 mile stretch, it is an incredibly rocky and strenuous incline. The very last segment of it has many hikers actually using their hands to climb over rocks - but then you're in for some breathtaking scenery. On a clear day you can see Clingmans Dome with the naked eye. 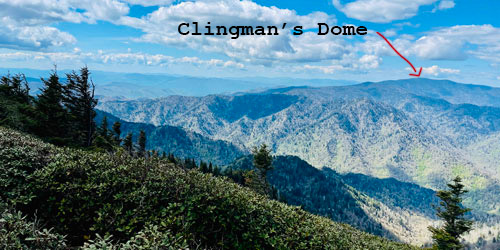 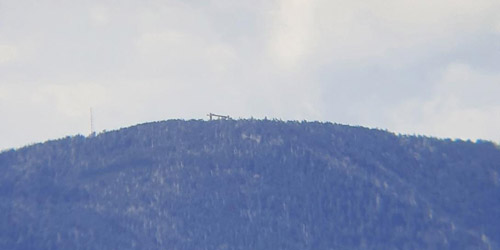 Clingmans Dome seen through binoculars from the Cliff Tops

Every time I reach LeConte Lodge and head for the Cliff Tops, I convince myself that the two tenths of a mile to the top couldn't possibly be that bad, but I am always wrong. Luckily the views are more than worth the climb. 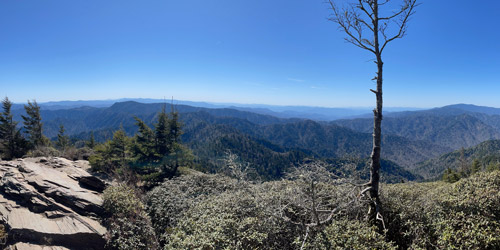 Another 0.2 mile spur trail off the Boulevard takes you to Myrtle Point, a stunning piece of rocky terrain with beautiful mountain views in nearly every direction, including Mount Guyot directly to the west. To reach Myrtle Point, head east from the lodge toward the Boulevard trail for approximately 0.7 m. You will pass the rock cairn at High Top and soon reach the marked trail to reach the vantage point. 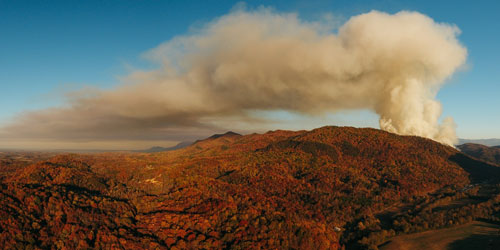 In November of 2016, two teenage boys hiking on Chimney Tops Trail were tossing lit matches on the ground during a period of extreme drought in the state of Tennessee. The fire stayed relatively contained by the terrain until five days later when winds exceeding 70 mph forced the fire into Gatlinburg. Although the community was eventually able to recuperate, the fires forever changed the face of Mt LeConte. Thankfully, LeConte Lodge was unharmed.

The blaze scorched 20,000 acres of the most visited national park in United States, destroyed or severely damaged 2,450 structures causing in excess of $500 million in damages, and killed 14 people while injuring 175 more. It was the worst wildfire in the state’s history.

Cambell Overlook Before & After 2016 Fires 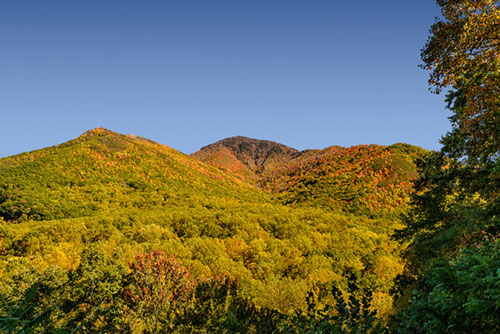 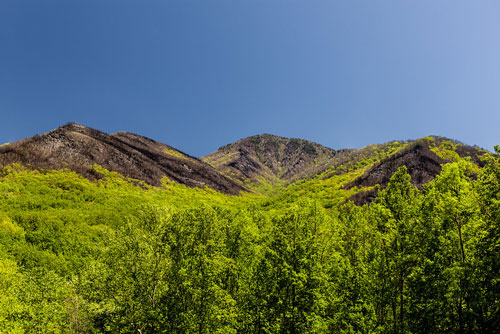 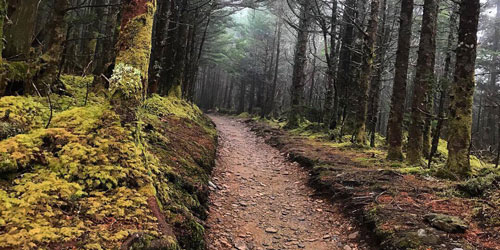 There is more than one way to reach LeConte Lodge. All six routes to the summit make up 43 miles of hiking trail out of the 800 in the Great Smoky Mountains. With the traffic on these six trails, Mt LeConte is one of the most traveled mountains in the park. As these are the only ways to ascend, supplies reach the lodge by either helicopter or the Trillium Gap llama train.

"Call it charisma. Or mystique or magnetism. Whatever you call it, Mt LeConte has it in abundance, enough to lure thousands of hikers each year up its rocky trails to its lofty summit. Nobody knows the who or the when of the first person ever to look east from Le Conte's Myrtle Point to watch the sun rise out of the mists and mountains, or who was first to see a sunset from Cliff Top. 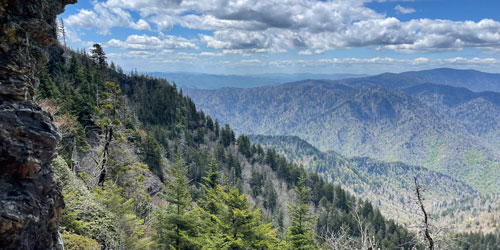 Elevation Grade: average 10%, max 26%
Mileage: 5 miles to LeConte Lodge
Pros: shortest & easiest route, incredible views throughout including Alum Cave Bluffs, Inspiration Point, and a distant Clingman's Dome on a clear day
Cons: the busiest of all 6 trails and one of the most trekked in the entire park 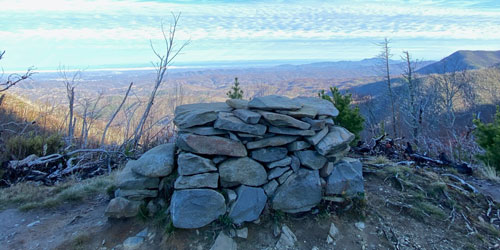 Elevation Grade: average 11%, max 27%
Mileage: 5.9 mile trail, 6.8 miles to the lodge
Pros: potential loop hike, The Pulpit, wide open views for most of the trail after the 2016 Gatlinburg fires, least traveled route
Cons: one of the steepest options making for quite a difficult hike 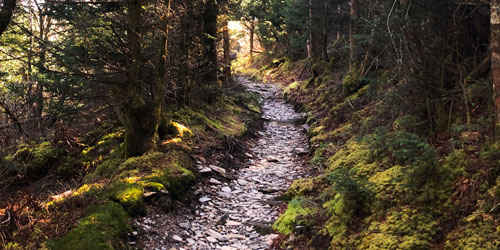 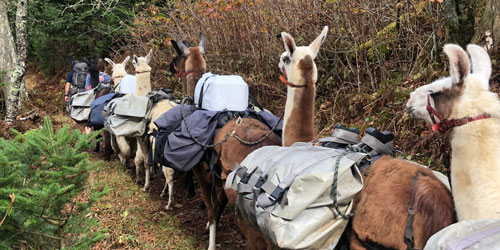 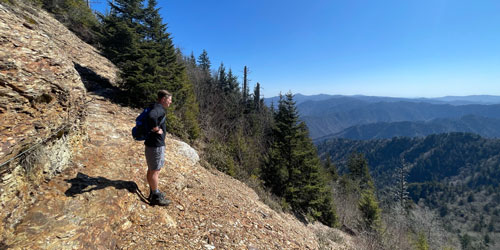 Elevation Grade: average 9%, max 27%
Mileage: 5.4 mile trail, 8.1 miles to the lodge
Pros: a high starting point makes for the only LeConte hike that isn't a relentlessly steep climb, incredible views throughout
Cons: the first 2.7 miles on the AT are part of the route to Charlie's Bunion, making it fairly crowded 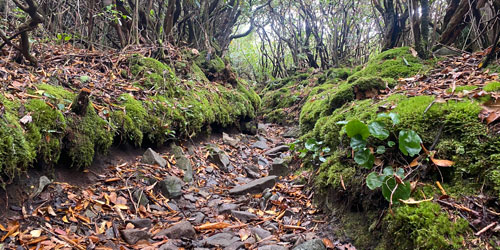 Elevation Grade: average 10%, max 20%
Mileage: 5.9 miles to the summit of Brushy Mountain, 9.1 miles to LeConte Lodge
Pros: the roundabout way of reaching the lodge makes it an unpopular option, beautiful views of Mt LeConte from the trail
Cons: the longest route possible, includes the last 3.6 miles of Trillium Gap